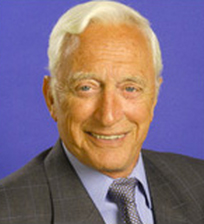 Dr. A. Richard Grossman was an internationally recognized plastic surgeon and pioneer in the comprehensive treatment of burn wounds. A graduate of Emory University and The University of Tennessee Medical School, his post-graduate training spanned eight years at Cook County Hospital, where he became Board-certified in both General Surgery and Plastic Surgery.​

The experience had a profound effect on Dr. Grossman and was a driving force behind his vision to create a world-class comprehensive burn treatment facility dedicated to providing the best burn care anywhere, whose philosophy would be to not just ensure survival, but to restore patients to as close to their pre-injury condition as possible functionally, emotionally and cosmetically.

Dr. Grossman subsequently moved to Los Angeles and set about to achieve that vision. In 1969, he convinced Sherman Oaks Community Hospital, located in a suburb of Los Angeles, to devote two beds exclusively to burn care. By 1978, the burn center had expanded into a free-standing, 30-bed specialty unit that today remains one of the largest and most comprehensive burn centers in the world.

Recognized internationally as a pioneer in burn treatment, Dr. Grossman is responsible for a number of innovative world firsts, such as the use of high-pressure oxygen chambers to speed the healing process and minimize scarring – a therapy which is now standard practice at many burn centers around the world.

Dr. Grossman served as the President of the Los Angeles Society of Plastic Surgeons for eight years, and is a member of many honorary societies (listed in his curriculum vitae). He has authored or co-authored over 35 articles in medical journals, and written or contributed to six textbooks.

He was the consultant for burn reconstruction for Saudi Arabia’s Ministry of Health and has trained staff and consulted on burn centers in Japan, Australia, Saudi Arabia, Iran and Israel.

As a result of the exceptional care he has provided to firefighters from many different agencies over the years, Dr. Grossman was named Honorary Fire Chief for the City of Los Angeles in 1994, and inducted into the Firefighters Hall of Fame by the California Department of Firefighters, two distinctions of which he is especially proud.

Dr. Grossman passed away peacefully on March 13th, 2014 and is survived by his heirs; two sons, Jeffrey and Peter, his granddaughter, Alexis and grandson Nicholas. It is in the spirit of Dr. Grossman’s life that the Grossman Burn Foundation seeks to make a difference in the lives of burn survivors and their families. Dr. Peter Grossman continues to carry on his father’s legacy in the medical community by leading and developing the Grossman Burn Centers on a global level and dedicating his life to helping the burn-injured patient.