From Indonesia to Los Angeles: A Burn Survivor’s Story
By Laura Gallop

Paying it forward: The story of how 6-year-old Sheila Hamad traveled from a remote village in Indonesia to Los Angeles for life-saving treatment of burn injuries actually started in the late 1970s when Keith and Anita Miles went to Indonesia as missionaries.

The Miles stayed in Indonesia for over 30 years, spending much of that time with the Tuguti tribe in a village called Lili. Since then, both Keith’s son, Andrew, and his grandson, Jesse, travel back to Indonesia periodically to fund medical missions for the Tuguti tribe, delivering medical supplies and treatments to the remote village. In late 2016, Jesse worked with the International Friends of Compassion (IFOC) in the village of Kusuri to arrange a medical mission. They traveled the ten-hour boat ride to Lili and spent ten days there. 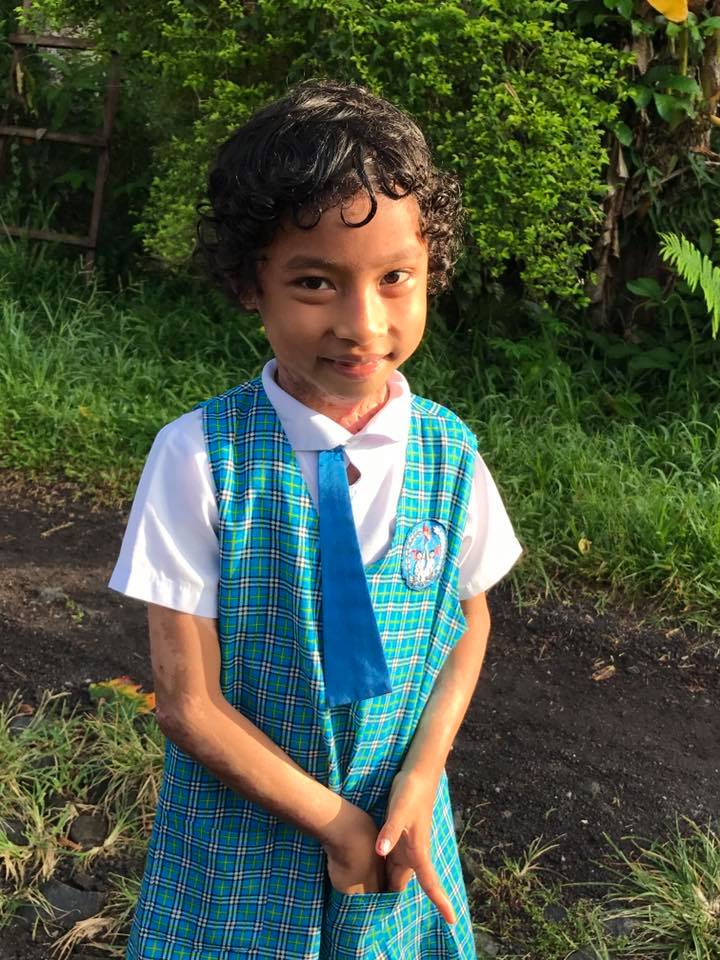 Just days after the medical team left, Sheila was home alone playing with a lighter. Some of the fluid from the lighter dripped onto her shirt and as she flicked it, suddenly her shirt went up in flames. She ran screaming from her home and before it was all over, she had suffered severe burns on her abdomen, neck, shoulders, arms and thighs.

The Tuguti tribe lives a very primitive life in the jungles of Indonesia, eschewing many of the conveniences of contemporary society, including modern medicine. The tribe’s witch doctor concocted a traditional paste of leaves and ash to cover the burns but over the next several days Sheila was in excruciating pain and not getting any better. Despite the Tuguti tribe’s general wariness of the outside world, the years of generosity by the Miles family combined with the recent visit from Jesse and the IFOC had fostered a deep sense of gratitude and trust. The head of the tribe reached out to local missionaries who arranged for a flight to bring Sheila, her mother and the head of the tribe to the IFOC compound for treatment. Staff at the IFOC medical facility cleaned and dressed Sheila’s wounds as best they could, but they could only give her Ibuprofen for her pain. Clearly she needed more advanced care.

Peter and Esther Scarborough of IFOC reached out to their friends Dr. Peter and Rebecca Grossman. Dr. Grossman runs the Grossman Burn Centers (GBC), with their flagship facility in West Hills, California, and is an internationally renowned burn treatment surgeon. The Grossmans also founded the Grossman Burn Foundation (GBF), which supports the GBC with philanthropic efforts including humanitarian missions to bring burn survivors from around the globe to the United States for treatment and reconstructive surgery.

Partnering with the Children’s Burn Foundation (CBF), GBF staff worked through the labyrinth of paperwork required to bring Sheila to the United States as soon as possible. Her situation was dire and time was of the essence. This was the first time GBC would be bringing an international patient who was in the acute stage of injury, and it was critical that all of the pieces fall into place. As the country debated a disputed travel ban, GBF staff worked successfully with the Department of Homeland Security to expedite processing of visas and passports for Sheila, her father Gileli and a nurse/translator, Emon. They were also able to get flights donated from the American Airlines Miles for Kids program. Despite fears of red tape and delays, the hard work and dedication paid off as everything went remarkably smoothly. 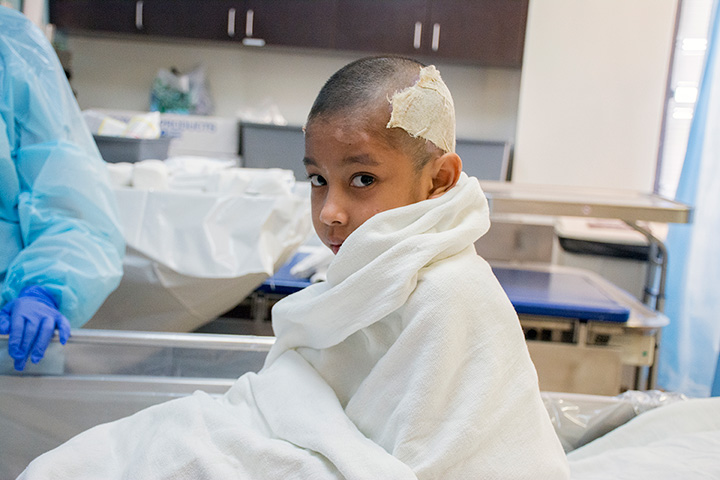 On February 12, approximately nine weeks after she’d been injured, Sheila arrived at the GBC after a long 26-hour journey. Dr. Grossman reported on the first day that Sheila was in a very compromised state. She was extremely malnourished and her wounds were infested with serious bacterial infection. Her breathing would soon be compromised if they couldn’t get her stabilized.  At six years old, she weighed just 36 pounds. Dr. Grossman warned that it was still a life or death situation, but he was confident that immediate intervention would give her the best chance of survival.

For Sheila and Gileli, coming from an isolated tribal life, the trip to California was overwhelming. They had never been in a car, let alone flown in a plane. Using showers and modern plumbing was foreign to them as they normally bathe in a river. The food was also different and foreign. Gereja Bethel Indonesia Church, located less than a mile from the GBC, was a constant source of comfort and support. From supplying traditional Indonesian meals to driving them places and running their errands, the pastor and church members stood by the father, daughter and translator during their entire stay.

Sheila was in the hospital for close to five weeks where she endured six surgeries to cover her wounds in skin grafts. She underwent daily hyperbaric chamber treatments to reduce swelling and edema, dressing changes to keep the wounds clean and infection free and physical therapy for movement and flexibility. In less than a month, she was healing well, walking, playing with toys, spending time in the garden and charming all the GBC staff and visitors with her shy smile and easy personality. She was discharged from the hospital about a week before her return to Indonesia, taking advantage of the extra time in Los Angeles with a private tour of the Los Angeles Zoo, a special trip to the Long Beach Aquarium and a party in her honor at the Indonesian Church.

Sheila, Gileli and Emon flew back to Indonesia less than six weeks after their arrival with enough memories for a lifetime. Sheila will spend six months at the compound in Kusuri where she can continue to receive necessary medical treatment and physical therapy to ensure that her scars heal well. The Children’s Burn Foundation will continue to provide assistance and medical treatment to her as she grows until she reaches the age of 18. As Esther Scarborough from IFOC said from the get-go, Sheila is a “warrior.” She came, she healed, she conquered.