Maybe the war will be won in the operation theater, not the military theater of operations. How are the jihadists going to counter this:
There’s a little boy, just 6, in Afghanistan who was terribly disfigured when a propane gas burner in his families poor home exploded. Brace yourself. This is not pretty.

Mahsoom — that’s his name — was in perpetual pain. He could barely eat or talk. When he was awake, there was endless pain, and at night, his skin itched terribly. And to top it off, the kids were cruel.

There is not a single burn center in Afghanistan, but the father knew unquestioningly what to do and where to go. He took the boy to the nearest American base because he knew what was there. Not a burn center. No, what was there was America’s biggest strength: It’s big heart.

Here’s how it happened, according to the OC Register: 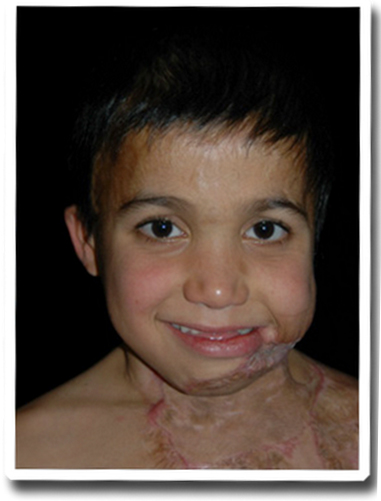 Army Capt. Jay Berendzen’s [the local base commander] heart went out to the boy, but there was little he could do, according to a team account: The Army evacuated only people with life-threatening conditions, and there wasn’t a burn center in all of Afghanistan, much less a surgeon who could execute the many demanding operations that Mahsoom’s injuries required. The captain sent Mahsoom on his way, but didn’t forget the boy’s silence and how he hid his face. As Mahsoom grew, the scar tissue would become tighter and tighter, more and more painful.

The captain started hunting for charities to take up Mahsoom’s cause. He came upon a news story about an Afghan girl named Zubaida, burned horribly in a kitchen fire, who was treated for free by Sherman Oaks plastic surgeon Dr. Peter Grossman. An e-mail exchange later, Grossman had agreed to do for Mahsoom what he had done for Zubaida, as long as someone took care of the boy’s travel and cared for him for the six months he’d be in the U.S. for treatment.

Soon e-mail popped into the inbox of Sadiq Tawfiq, owner of the Khyber Pass gallery in Laguna Beach. Tawfiq, who spends a great deal of time in his native Afghanistan, was founder and president of the Rotary International Club in Herat.

He was also a board member of the Laguna Hills-based International Orphan Care, a charity that runs schools and orphan centers in Afghanistan. Could the organization help? He shot off more e-mails. Of course it could help.

Many others felt the same way. The Children’s Burn Foundation. Childspring. Dr. Abdul and Sharifa Asat of Van Nuys, who already had three children, agreed to take Mahsoom into his home for as long as the treatment took. International Orphan Care raised about $12,000, and eight boys calling themselves SATA – Super Achievement of America – pitched in more than $1,200 by doing chores, asking their families for matching donations and hosting a hamburger cookout for their soccer teams, classmates and neighbors in Laguna Niguel Regional Park.

After months of filling out paperwork and waiting for permissions, a nervous Mahsoom boarded a plane for Los Angeles. Zubaida, the girl who had endured all he was about to endure just a few years before, was by his side. She would accompany him to America, stay for the duration with the Grossmans and get follow-up treatment of her own.

The Children’s Burn Foundation funded Mahsoom’s case and partnered with the GBF to ensure follow up surgeries in Kabul, Afghanistan.