As part of the ten day trip to Indonesia, GBF personnel used the telemedicine equipment to treat a young woman maimed in a domestic violence incident with a temporary prosthetic nose, and to begin evaluations necessary for facial reconstruction surgery. GBF staff also consulted with surgeons in Los Angeles and renowned Hollywood special effects artist, Alec Gilles, for consulting in this case.

Yustince suffered extensive injuries at the hands of her abusive husband. During an altercation, the patient’s husband pinned her to the ground and severed her nose with a machete. Since the attack, the patient has worn a piece of gauze secured by surgical tape over the area. As a result, in addition to the initial wound, the patient sustained acute irritation to the area covered by surgical tape. In 2010, GBF encountered Bibi Aisha, a patient very similar to this Indonesian patient. Bibi Aisha was attacked by her Taliban husband, who severed her ears and nose as punishment for attempting to escape. 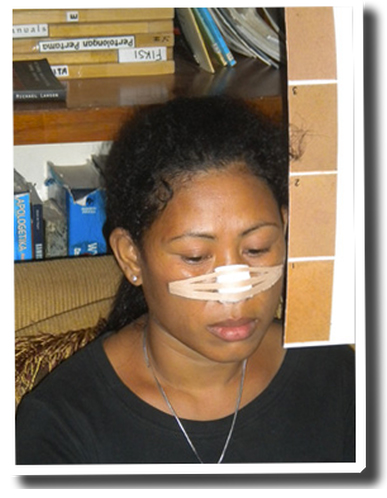 Bibi Aisha miraculously survived the attack, and was featured in the July 2010 cover of TIME Magazine to symbolize the plight of Afghan women. Much like Bibi Aisha, Yustince’ self-concept, sense of security and normalcy had been decimated.

In order to heal both the patient’s literal and figurative wounds, GBF enlisted the help of Alec Gillis, an Academy Award-winning special-effects artist with extensive experience in prosthetics. Using facial measurements and photographs provided by GBF and IFC, Gillis designed a series of prosthetic noses for the patient that would match her facial contours and complexion. The prosthetic noses can be attached with magnets to eyeglasses or worn alone with an adhesive. 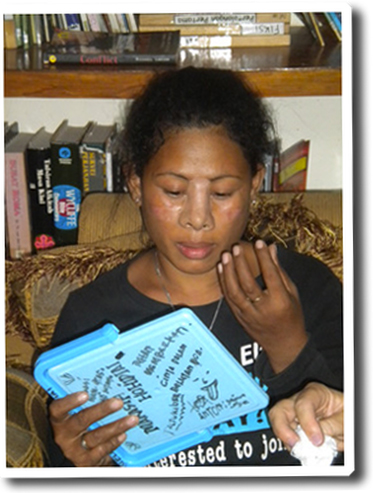 During the telemedicine session, the patient was fitted with the prosthetic, and Dr. Grossman and his team evaluated it. When the patient was first instructed to remove her temporary bandage, the GBF/IFC team became aware of her dissociation – she seemed to transport herself to another time and place to avoid the trauma of having her wound exposed. Once Rebecca Grossman fitted the patient with the prosthetic nose, the team could sense that she was able to reconnect with the present situation. She was still reserved, but Roberson noticed the first signs of her “Mona Lisa smile”.